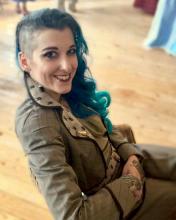 Anne graduated from Rose Bruford College of Theatre and Performance with a BA (hons) in Costume Production in 2013 and has since worked as a costume maker, assistant and super visor in theatre, TV and film. Her first job out of university was on the hit west end musical Wicked. Other theatrical companies Anne has also worked for include: English National Ballet, Royal Opera House, National Theatre, and Angels the Costumiers.

Anne’s film and TV work includes designing for several independent projects as well as being a trainee on 2015 film Spooks; The Greater Good, in the costume workroom on season 5 of Game of Thrones and on TV mini series Taboo for the BBC/FX. Most recently Anne has worked on the BBC’s adaptation of His Dark Materials, and Beecham House for ITV.

Anne has worked with South Hill Park from summer 2015 on productions such as Alice in Wonderland, The Borrowers and the 5-star reviewed Sweeney Todd, alongside Peter Pan, Macbeth, The Importance of Being Earnest, The Lion, the Witch and the Wardrobe, The Railway Children, Romeo and Juliet and Robin Hood.